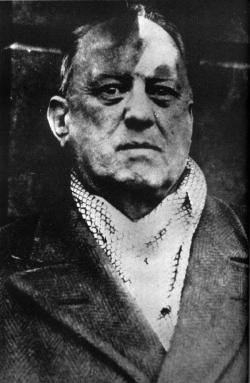 Born in Leamington Spa, Warwickshire
Born on 12th of October 1875
Died in Hastings, Sussex
Died on 1st of December 1947

Magician, poet, mountaineer, chess master, author, drug user, spy, and prankster: Crowley, born before his time, lived to the full and continues to inspire and shock even today. His fearsome reputation was due to his disregard for convention, a trait nowadays endearing him to many. His famous maxim, Do What Thou Wilt was applied at every opportunity.

Aleister (Alexander Edward) Crowley was born on the October 12 1875 in Leamington Spa, into a family of strict Plymouth Brethren. With the death of his father (1887) Crowley inherited a fortune freeing him from the need to work. During 1896 while at Trinity College, Cambridge he began his lifelong study of occultism and mysticism. In 1898 Crowley joined The Golden Dawn, an occult revival group, progressing rapidly through the various stages of magical initiation.

It was in Cairo during 1904 that Crowley wrote The Book of the Law dictated to him by his guardian angel Aiwass via his first wife Rose in a trance. Other magical revelations followed throughout his life and to this end Crowley used of a succession of Scarlett Women and male acolytes to enhance his magic but also to indulge his bisexuality. Crowley was also an authority on drugs advocating them for psychic research and, in the case of heroin, for his chronic asthma.

As a mountaineer Crowley was outstanding and his assaults on K2 and Kangchenjunga, the second and third highest peaks in the world, were considerable feats though typically marred by deaths and controversy.

In 1920 he set up the abbey at Thelema, an experiment in communal living with tragic consequences for others less able to deal with the excesses he advocated. Eventually his exploits gained him notoriety as the Great Beast 666, "the wickedest man in the world." Crowleys life became more difficult once he had exhausted his fortune and in 1934 he was declared bankrupt.

Crowley is reckoned to have been a secret agent during the two world wars and Ian Fleming wanted to harness his knowledge of astrology to lure Rudolf Hess to England. He died on December 1 1947 in Hastings. His funeral reading created an outrage and Brighton Council acted to ensure no such event could recur.

Contributors: Do you have a site related to Aleister Crowley?
Supply some content for this page and we will gladly add a link to your site. Email here.