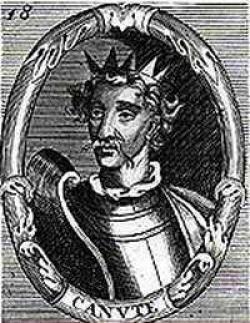 Canute was a Viking king of England, Denmark, Norway. Born between 985 and 995, his father was Sweyn Forkbeard Of Denmark, and his mother was Gunhilda. He sailed with his father and a huge Viking army when Sweyn invaded England in 1013, although Sweyn died in February 1014. Canute was declared King, this did not please all, some voiced their preference for Ethelred The Unready to be bought out of exile in Normandy. This tempted Canute to leave England's shores on a journey back to Denmark. At Sweyn's death, Canute's elder brother Harald succeeded to the throne of Denmark.

Undeterred, Canute rallied support, with thousands of Vikings and Nobles prepared to once again set sail for England, determined to conquer in 1015. Thousands landed and a massive onslaught ensued, many battles fought over several months. The final battle was the Battle Of Assandun in Essex where victory was gained for Canute. Diplomacy reigned when an agreement was reached that all lands north of the Thames were to be ruled by Canute, an agreement was also reached that on the death of one, the other would rule the whole of England. This ultimately enabled Canute to be the sole ruler of England in 1016. He was crowned in 1017 at the Old St Paul's Cathedral. His wife Emma of Normandy had been the wife of Ethelred The Unready, he had several children, Harold by Aelfgifu, and Hardicanute, and a daughter Gunhild, both by his wife. His reign of lasted nearly eleven years, during which England's position and importance was strengthened, wealth followed, and peace was achieved. He kept his fleet at Bosham and is noted in the stunning Bayeux Tapestry, it was whilst he was here that frustrated with his subjects layering on the flattery, that he was determined to show them that being a King had it's limitations in power, and he performed an act which would be forever engraved on the pages of history, he commanded the sea to retreat, when of course the sea failed to obey, he proved that Kings had their limitations. On the death of his brother Harold, Canute sailed to Denmark to claim the throne. He named his son Hardicanute as heir to the throne, he died whilst in Shaftesbury in 1035, and was later buried at Winchester Cathedral, although the Civil War centuries later saw the disturbance of his remains. His son Harold succeeded him, and ruled as Harold II.

Contributors: Do you have a site related to Canute?
Supply some content for this page and we will gladly add a link to your site. Email here.