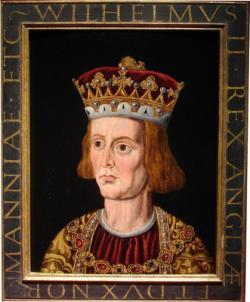 William II known throughout history as William (Rufus) due to his ruddy complexion was born in 1056 in Normandy, France, his father was William (The Conqueror), and his mother was Matilda of Flanders. When his father William the Conqueror died after receiving fatal wounds at the siege of Mantes he bequeathed Normandy to his eldest son Robert Curthose, and he gave England to William. William The Conqueror was buried at St Stephen's Abbey in Caen.

William was crowned as King of England on the 26th September 1087 at Westminster Abbey, but this was tinged with angry feelings by the Barons, that his elder brother Robert should have inherited the throne, this ultimately led to a rebellion by the Barons, as many of them held lands in both England and Normandy, and, it was felt that loyalty to one ruler would be disloyal to the other. It was decided that Robert should be ruler of England, however, Robert failed to show up in England to rally the support, and in 1088 William gathered the support of the powerful Barons instead, and ended the Rebellion. He then decided to invade Normandy in 1089 and successfully gained some of Robert's land. This prompted his brother Robert to embark on a journey to the Crusades, he offered to lease Normandy to William for a large sum of money, which William paid for by raising Taxes in England which proved an unpopular choice. He was also very unpopular with the church, as he increased taxes and sold church positions instead of them being filled by those appointed. He remained unmarried, thereby no legitimate, or illegitimate children were born. He enjoyed hunting, and it was whilst he was in the New Forest that he was mysteriously murdered, fatally shot with an arrow, he was later buried in Winchester Cathedral in 1100. His brother succeeded him and ruled as Henry I

Contributors: Do you have a site related to William II (rufus the red)?
Supply some content for this page and we will gladly add a link to your site. Email here.