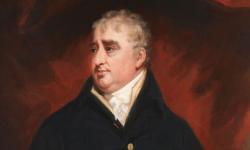 
Educated at Hertford College, Cambridge. Became MP at age of 19. Secretary of State in 1782. Long political contest with William Pitt, the Younger. Opponent of war with France, negotiated peace. On point of introducing bill for abolition of slavery when he died. Greater debater. Addicted to gambling and drinking. Buried in Westminster Abbey.

Contributors: Do you have a site related to Charles James Fox?
Supply some content for this page and we will gladly add a link to your site. Email here.