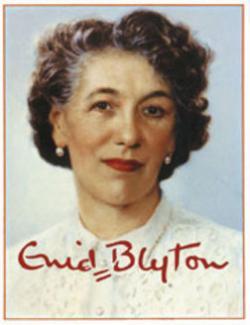 Enid Mary Blyton was born on 11th August 1897 and died on 28th November 1968. She was a popular and prolific writer of children's books, once described as a "one woman fiction machine". She is most famous for her series of books based on recurring characters such as Noddy (also a long running animated TV series), the Famous Five (21 novels written between 1942 and 1963), the Secret Seven (15 novels written between 1949 and 1963), the Malory Towers and St. Clare's series, and The Wishing Chair books. Her work has been translated into nearly 90 languages and sold over 400 million copies worldwide. She was born in East Dulwich, London, the eldest of three children born to Thomas Blyton, a cutlery salesman, and his wife, Theresa. The family later moved to Beckenham in Kent where Enid attended St. Christopher's School, leaving as head girl. She trained as a teacher at Ipswich High School and taught for five years, writing in her spare time. Her first published book was a collection of poems titled 'Child Whispers', published in 1922. Her books are generally split into three types: ordinary children in extraordinary situations, having adventures and solving crimes; the boarding school stories - a world of midnight feasts, practical jokes and jolly hockey sticks; and the fantastical where children go into magical worlds of goblins, elves and fairies such as The Magic Faraway Tree series. In 1924 Blyton married Major Hugh Alexander Pollock, an editor at her publishing firm, George Newnes. The couple lived in Beckenham and Buckinghamshire and eventually in a house in Beaconsfield called Green Hedges, as named by Blyton's readers following a competition in Sunny Stories, an Enid Blyton magazine. They had two children, Gillian and Imogen. Blyton was a Christian, but rarely attended church. She published numerous books on biblical themes and her story, 'The Land of the Far Beyond' is a parable along the lines of John Bunyan's, The Pilgrim's Progress. In 1941 Blyton met Kenneth Waters, a London surgeon, and following each divorcing, they married in 1943. She subsequently changed her daughters' surnames to Waters and they all lived together as a family at Green Hedges. Blyton's books are very much of their time and she came under much criticism in later years for her limited literary qualities and popularization of negative stereotypes regarding gender, race and class. Modern reprints of some books have had changes made such as the replacement of 'golliwog' characters with teddy bears. Blyton suffered from Alzheimer's in her latter years and lived her last months in a nursing home in Hampstead. Her literary output was an estimated 800 books over 40 years.

Contributors: Do you have a site related to Enid Blyton?
Supply some content for this page and we will gladly add a link to your site. Email here.