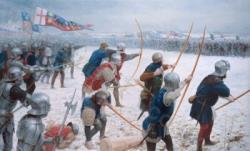 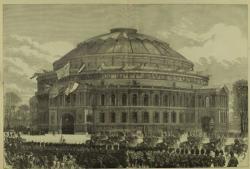 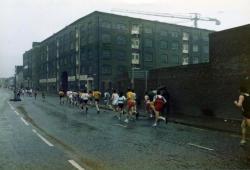 Between the villages of Towton and Saxton, just to the south of Tadcaster, what was probably the bloodiest battle ever fought on English soil took place on March 29th, 1461, somewhat ironically Palm Sunday that year.

The fluctuating fortunes of the Wars of the Roses produced two kings of England at this juncture: Henry VI , the vacillating and mentally unstable head of the house of Lancaster, and the son of Richard Duke of York, lately slain at the battle of Wakefield , now proclaimed King Edward IV and crowned in London by Warwick the Kingmaker in spite of recent defeat at St Albans.

This untenable situation was to be resolved in the north, Henry having withdrawn there rather than seize the initiative after St Albans . Edward pursued him there, both men mustering armies of perhaps 40,000 men each, the Yorkists led by the Duke of March, the Lancastrians by the Duke of Somerset. Half the peerage was said to be present at the battle, and with no quarter agreed at the parley beforehand many perished in the fight.

After initial skirmishes at crossing points on the Aire , Edwards vanguard cut off and wiped out Cliffords raiding party.

The battle proper took place on ground that meant the losers would face certain ruin: should the Yorkists lose the Aire to the south blocked retreat; for the Lancastrians the Wharfe to the north and east would have the same effect, and to the west the Cock Beck, in spate, blocked all parties.

The battle raged for ten hours, the wind blowing snow into the faces of the Lancastrians, making their arrows fall short, so the Yorkists were able to rain their fire on their enemy almost unopposed, even using the Lancastrian arrows from the ground before them to fire back.

Somerset was forced to advance and fight at close quarters, the bloody conflict lasting for hours, the Yorkists forced back until the Duke of Norfolk arrived with 5,000 fresh men, and the Lancastrians broke and ran. During the fighting it was said bodies had to be cleared to allow the opponents to reach one another. It is thought 10,000 of the White Rose force died, and the defeated Red Rose army lost 20,000 or more, the Cock Beck said to have run red with blood as the fleeing soldiers were cut down by their pursuers.

The slaughter continued afterwards, Lancastrian nobles executed in droves, and those who survived had to bow to Edwards rule.