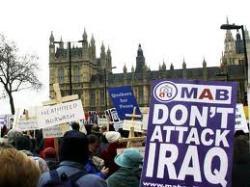 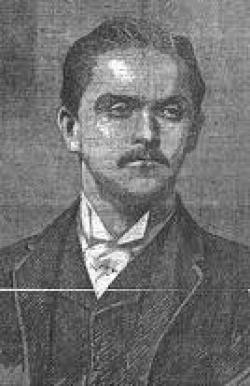 Depending on whom you believe the huge demonstration in London on February 15 2003 against the impending Iraq war attracted 750,000 participants (the police); 1 million (the BBC); even 2 million (the organisers). Numerous enough that two start points were agreed with the police, The Embankment and Gower Street; the two columns merging at Piccadilly and continuing to Hyde Park for the rally (in spite of official attempts to deny access there  the reason of course fears for the grass rather than any ignoble attempt to stifle protest).
On a miserable February day people arrived from all over the country to make their feelings known to politicians who were ignoring what they wished; and continued to do so. One of the striking things about the event was the breadth of support: as ever SWP college lecturers marched; but so did rural WI members; school-kids; nuns; and celebrities like Alexander McQueen, Banksy and Tim Robbins, whose comment that this was what democracy looks like highlighted the disconnect between the traditional political parties and the evident will of the people. The only major party leader to speak was Charles Kennedy, his parliamentary partys position rather different from most attending, and from most of its grass-roots members.
But other more committed voices were heard: the late great Mo Mowlam; and veteran radical Tony Benn. Ken Livingstone helped facilitate the day; CND backed it along with Greenpeace.
In Glasgow perhaps another 75,000 rallied; in Belfast 20,000. Yet Tony Blair managed to persuade his parliamentary colleagues to follow his increasingly isolated lead. And MPs ponder why fewer of us bother to vote at elections.