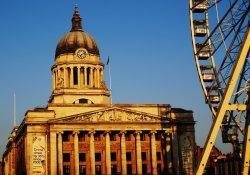 Did you know that the screen room on Broad Street is, with 22 seats, the smallest public cinema in the world

Did you know that Notts County FC is the worlds oldest professional football league club? The club was formed in 1862, though in those early days it was amateur. Greatest day for the original Magpies was surely their FA Cup Final win (at Goodison Park) in 1894.

Did you know that Nottingham is the birthplace of both Boots the Chemists and Raleigh Cycles? And that HP sauce was invented here by grocer F.C. Garton? Boots is even older than County, as John Boot set up the business in 1849. Raleigh is a relative youngster, formed in 1887. And HP Sauce a mere stripling, the name registered in 1895 (HP denoting Houses of Parliament where Garton heard his delicacy was served).