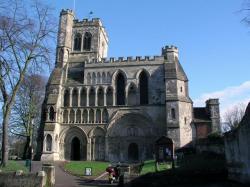 Did you know that the first ever play recognizable as such recorded as performed in England was written in Dunstable by Geoffrey de Gorham in the 12th century? He staged it at Dunstable Priory . For the play he borrowed some clerical capes as costumes. They were destroyed in a house fire, and in an act of penance the proto-luvvie became a monk at St Albans Abbey .

Did you know that Dunstable Priory was the scene of the end of Henry VIII 's marriage to Catherine of Aragon ? It was here in May 1533 that Thomas Cranmer (who had once been chaplain to the Boleyn family) pronounced their marriage illegal and thus null and void on the grounds that she had been married to his brother Arthur previously.