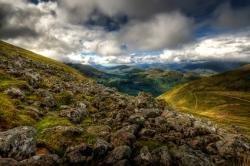 Did you know that during World War Two the SOE (special operations executive) conducted much of thier training around Arisaig. The SOE were forerunners of todays famous SAS. Arisaig House was used as a training centre and the local area under special security measures. The SOE dropped agents into occupied countries to support resistance movements and send intelligence reports to Britain. Their nickname  the Baker Street Irregulars  referred to their London HQ, but its echoes of the street boys who assisted Sherlock Holmes spoke too of the working class and sometimes criminal origins of many operatives.