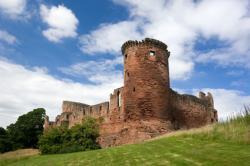 There is a certain sense of duality about East Kilbride. Certainly, the town on the fringes of Glasgows great suburban reach was Scotlands first new town, and has attracted the commuter to its meticulously planned and oft-mocked assembly of roundabouts and cul-de-sacs. But East Kilbride is not just this new town; old East Kilbride, just along the road from its younger sibling, dates back to Roman times, and takes its name form the Saint Bride, the Irish saint whose County Kildare monks brought Catholicism to the area. Like many places in Scotland and Ireland  Kilmarnock, Kilpatrick, Kilbowie  the kil in Kilbride is a giveaway of its ecclesiastical roots, and is an anglicisation of the gaelic cull, meaning church or grave. Contemporary East Kilbride grew quickly during the post-war housing crisis. The Second World War had left Glasgows tenement housing bursting at the seems, and the hitherto modest village of East Kilbride became the first to be redrafted and re-imagined as the start of Britains boom in constructing new towns. Just eight miles from Glasgows city centre, and with an excellent road and rail transport infrastructure, East Kilbride lured skilled workers to its residential neighbourhoods. The town centre is dominated by a network of six shopping malls which link to form one gargantuan shopping centre. Commerce adding to East Kilbrides charms as one of Glasgows commuter towns, and a safe haven to raise a family. Scotlands sixth largest towns modest past as a sedate rural farming village has long since evaporated, swallowed by the expansion of modern living. But its evolution does not appear to be halting any time soon; South Lanarkshire Council have sanctioned a £400 million budget to redevelop East Kilbrides town centre in a project which will again transform the town in the next ten years.

Places to Stay near East Kilbride

Adjoins one of Scotlands largest shopping Arcades ..The Plaza.. and is surrounded by numerous restaurants and bars and the Hotel has its own Nightclub. Relax in the exquisite Cocktail Bar and dine in our Four ... More | visit website

Ideally situated for both business and leisure guests. For business this hotel is near to Enterprise business park. Local attractions include a cinema, ice rink and Calderglen country park. Conveniently located for East Kilbride train ... More | visit website
map website

Ideally situated for both business and leisure guests. For business this hotel is near to College Milton and Peel Park industrial estates. Within walking distance of East Kilbride train station. For shops and local amenities ... More | visit website
map book

The MacDonald Crutherland House Hotel is a superior first-class hotel. The Hotel is located on 37 acres of grounds close to all major routes for business and tourism. This is an excellent ... More

If you are searching for East Kilbride hotels or indeed Glasgow hotels for your next short break in Scotland, the modern, fully air conditioned and Wi-Fi enabled Holiday Inn Glasgow-East ... More

Carnbooth House is ideally situated in a picturesque country setting on the south side of Glasgow, only 5 miles from the city centre. Local villages include Carmunnock, Busby, Thortonhall and Castlemilk. The town of East ... More | visit website
map book

The Busby Hotel, in the southern outskirts of Glasgow, is comfortably arrived at by road, rail or air. The hotel allows easy access to the commercial centres of Glasgow, East ... More