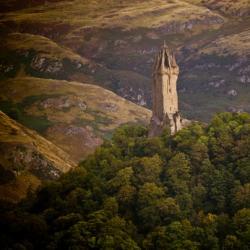 There is one city in one historic county that provides visitors with the most powerful snapshot of Scottish history. Not Edinburgh, nor Glasgow, but the former capital Stirling. It may be Scotlands smallest city, and have only gained city status in 2002, but Stirling and its surrounds offer an unbeatable wealth of ancient buildings and historic sites: not for nothing has it earned the title The Key to Scotland over the centuries.
With the focus on Stirling itself this break is one where you might consider letting the train take the strain, though with the M9 passing right by the place it is relatively easy for drivers from the south to access, and of course folk in the Central Belt. Indeed it was Stirlings key position for travellers, at the lowest crossing point of the River Forth thus funnelling access to and from the Highlands through the settlement, which gave the ancient burgh its place in history.
Historically the right place to start this tour could be south of Stirling, where prehistoric carvings and the Randolphfield Standing Stones can be found. But it is from medieval times to the Stuart era that we are most concerned with here, so the logical starting point, and one you cant miss atop its 400 hill, is Stirling Castle . Stirling had some sort of fortress in the 12th century, firstly probably a wooden structure, then stone. The one you see today dates almost entirely from the late 15th to the end of the 16th century. It was a favoured royal residence, and among others Mary Queen of Scots was crowned here. Like Mary herself the castles architecture exemplifies Scotlands strong historic links with France: The Great Hall, now fully restored, would not be out of place on the Loire, though the Royal Palace has a more Scottish feel.
A stroll around the area just outside the castle is rewarding for those seeking a touch of history, the entire Old Town packed with sites of interest : Argylls Lodging, another fine Renaissance building in fine fettle; in rather poorer condition thanks to its then owner choosing the losing side in the 1745 Jacobite uprising, is Mars Wark. If you are looking for royal connections, the Church of the Holy Rude in Old Town (where John Knox often preached) has a special claim-to-fame, as the only working British church other than Westminster Abbey to have held a coronation  that of James VI (James I over the border). And the rather later  in fact Victorian - Old Town Jail (kids love the creepier, spookier side of things) is somewhere you should not miss.
In the Gowan Hill area of Stirling there is another rather macabre spot, though not as expansive and fascinating as the jail  the beheading stone, where in late medieval days a number of dignitaries who came second in various struggles were executed, among them the Duke of Albany, one-time regent to James I.
Outside the city make for Stirling Bridge. The present structure is 15th century, but the site has huge resonance for the Scots, for it was here in 1297 that William Wallace had his greatest victory in the war against Edward I. Nearby is the ruined Cambuskenneth Abbey , founded by David I, site in 1326 of a Parliament called by Robert the Bruce.
The Wallace National Monument overlooks the battlefield, but then high on a hill and with 246 steps to the top the tower overlooks plenty more besides, an ideal place to take in the country, and somewhere that will never be forgotten.
While we are on great Scottish triumphs, a little south of Stirling is the site of perhaps the most famous: Bannockburn , where Robert the Bruce defeated Edward II in 1314, a huge humiliation for the English. There is a Heritage Centre at the site, open between March and October, run by the National Trust for Scotland.
It would be a mistake, transport permitting, not to explore some of the other towns in Stirlingshire. Dunblane a few miles north has an ancient cathedral whose largely 13th century architecture is rather different from the grandiose style we normally associate with such buildings.
The region has many more castles to visit other than Stirling, if you get a taste for the martial: Alloa has its famous tower, complete with pit dungeon and, rather more civilly, the huge and original oak beams of its roof; and a few miles to the north-west of Stirling lies Doune Castle, a fine example of medieval military architecture, one of the best preserved in the country.
If sites military and religious begin to pall, one further place to be recommended in Stirling itself is Smith Art Gallery and Museum , among whose treasures are the oldest football in the world and the oldest curling stone. Its picture collection is splendid, but for some of us the draw has to be that football that may have been kicked by Mary Queen of Scots.
Information Britain has a fine selection of hotels, B&Bs and self-catering options for you to consider in Stirling and the towns and villages around it. We trust you will have a wonderful time investigating our past, wherever you choose to stay.