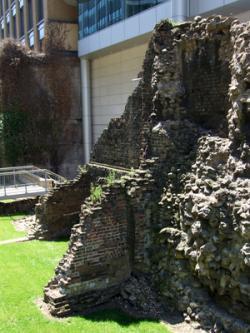 It was the Romans who first established a settlement where the mighty city of London now stands back in AD 43. They chose the area marked by three hills situated by the River Thames : Ludgate Hill, Tower Hill and Cornhill and called the place Londinium. The Romans were to stay in London for around 400 years and there is still a collection of interesting sites for the modern day traveller to seek out and enjoy, even though much of it hardly gets a second glance from tourists and residents alike.

The Romans built a stone wall around their city and remains of this can be seen in several places around the Square Mile. You can follow the path of the old wall, perhaps starting at Trinity Place on Tower Hill , where a ten foot wide and twenty foot high section of Roman wall still stands. The next surviving portion of the wall can be seen in the courtyard of an office building on Coopers Row. The line of the wall then passes through Fenchurch Street station, American Square, Vine Street and into Jewry Street. Aldgate is next landmark and is where one of the Roman city gates once stood. The line of the ancient wall runs from there into Duke Street Place and onto Bevis Marks. From here the wall runs across Bishopsgate and then along London Wall, the street that derives its name from the ancient Roman fortification. Noble Street is just off London Wall and here sections of the wall and some impressive remains of a Roman fort are clearly visible. There is a substantial section of a round bastion tower at Cripplegate. The Chamberlain Hotel , which is at 130 Minories by the Aldgate would make a perfect base for an exploration of the old Roman Wall.

Museum of London archaeologists unearthed the capital's only Roman amphitheatre under Guildhall Yard in 1988. Their work meant that, 15 years after the discovery, the doors to the amphitheatre opened again for the first time in around 2,000 years. The amphitheatre is part of the exhibition at the Guildhall Art Gallery at Moorgate . The Museum of London, which is on London Wall, has a collection 47,000 objects dating from the Roman occupation. Most of these objects were found during excavations prompted by accidental discoveries as the result of building work in the City of London and the Southwark area. The galleries at the Museum of London contain hundreds of craft tools, pottery and glass vessels. The museum even has reconstructed Roman rooms and models that show how people lived, worked and were entertained. The marble sculptures from the Temple of Mithras on show there are considered to be among the finest works of Roman art ever found in Britain. The hotel at 196 Bishopsgate is ideally located in the City of London and would make an ideal base for a visit to both museums.

Boudica, the Celtic Queen, came to Roman London in fury and burned it to the ground in AD 60. There is a legend, although it has little or no archeological evidence to support it, that suggests the Celtic queen was buried under what is now platform 9 and 10 at Kings Cross station. The busy London station serving lines going North is built upon what some believe was the site of the Queens defeat in battle with Roman commander Suetonius Paulinus.

St Pauls Cathedral is probably Londons most famous place of worship but very close to Wren s masterpiece is the remains of a much older religious site. The Roman temple of Mithras was discovered after the Second World War , during building work beside nearby Walbrook. Construction at the original site meant the temple was moved to its present location in Temple Court at the corner of Queen Victoria Street. The stylish Crowne Plaza hotel is just a minutes walk from St Pauls cathedral, making it an ideal place to stay for a visitor on a trip back into Londons Roman past.

One of the Roman Londons most interesting artefacts is the London Stone, located in Cannon Street and protected behind an iron grating. This seemingly humble stone marked the point from which the Romans measured all distances in Britannia and thus it sits at the heart of the Roman province. Threadneedles is a fabulous hotel situated in a converted banking hall in the heart of the city. It is close enough to all of the sites mentioned in this article to make it a perfect base for exploring the 2,000 year old Roman history of the City of London.