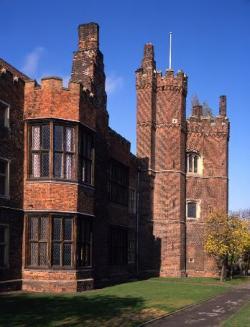 Lincolnshire and the Pilgrim Fathers

We may more readily associate the Pilgrim Fathers with Plymouth, from which The Mayflower departed in 1620, but their story goes back further, and Lincolnshire looms large in it. For Britons and perhaps for American visitors a short tour of sites there linked with those patriarchs would take at most three days, but give an insight into and a flavour of those times when the Pilgrims escaped England for a long sojourn in Holland before the final leg to America. The Separatists as they were once known largely originated over the county border in Nottinghamshire : Scrooby was home to William Brewster, Babworth to Richard Clyfton; John and Bridget Robinson came from Sturton-le-Steeple.
But it was Gainsborough in Lincolnshire, not many miles east of those places, which became a hub of Separatist worship, Gainsborough Old Hall used as a makeshift religious centre thanks to the patronage of its owner Sir William Hickman, who allowed the proto-Baptist preacher John Smyth to conduct services there. Gainsborough Old Hall is a magnificent late-medieval manor house, open year-round except for two weeks around Christmas and on Sundays, and would be worth visiting just for its wonderful architecture let alone its place in history. The contents of the building also inspire the imagination to conjure images of the Pilgrim Fathers, furniture of their day in particular helping that process.
Gainsborough is an inland port on the River Trent , its waterside another attraction in the area linked to the Pilgrim Fathers, as it is thought fiery cleric John Smyth and around 40 of his congregation sailed to religious freedom in Holland from the quay there in 1607, preceding the move by greater numbers of separatists from Nottinghamshire later in the year, travelling by barge to Hull where they would have taken ship for Amsterdam.
Persecution led the Scrooby separatists to decide on a similar course of action in the autumn of 1607. They first made their way across country, including the Lincolnshire Fens , to Boston, the men walking, the women and children probably in carts. As you approach Boston today, exactly like 400 years ago the first sight you have of the town is its huge church tower, ironically named The Stump , rising 272 feet above the ground. Inside St Botolphs Church there are various memorials to the Pilgrim Fathers, including founder of Boston Massachusetts, John Cotton.
The captain of the ship they had chartered to take them to the Netherlands betrayed them, however. The emigrants lacking documentation and permission to leave the country were held in the cells of Bostons 14th-century St Marys Guildhall . That impressive building is now a museum with plenty of exhibits linked to the Pilgrim Fathers, including in The American Room opened in 1938 by then US Ambassador Joe Kennedy, another must-see for those following in their footsteps. Their trial took place under the same roof. Most were quickly released, others held longer before they were able to return to Scrooby, where again they planned their escape.
At Scotia Creek near Fishtoft just east of Boston there is a memorial to the Pilgrim Fathers, its inscription stating: Near this place in September 1607 those later known as "The Pilgrim Fathers" made their first attempt to find religious freedom across the seas.
In the spring of 1608 they arranged for another ship to carry them across the sea, this time their departure point Immingham on the North Lincolnshire coast, more specifically or so it is mooted Habrough Creek, now subsumed into the modern port facilities.
The men walked, the women and children travelled by barge along the Trent as their Gainsborough co-religionists had before them. The barge became stuck on the mudflats at Killingholme Creek. The area along the Humber is now heavily industrialised and a major port, though just behind it the country is very pleasant with many historic sites of note. Their way to the ship is thought to have taken at least some of them through Brigg , Barnetby and Kirmington among other towns and villages nearby.
In the town itself the museum records its connections with the Pilgrims. After various mishaps  the men separated from the women by the weather and events  the group was able to reunite in Amsterdam, but not before the women were briefly imprisoned in the town. A memorial to this part of the epic journey can be seen near St Andrews Church in Immingham.
Though the history is fascinating and powerful, the monuments and buildings equally so, those undertaking such a tour should by no means miss out on other sites along the way or nearby: it would be a crime to bypass Louth , for example; Market Rasen is another fine old settlement; and the coast at Mablethorpe is lovely, places perhaps to weave with others into your itinerary.