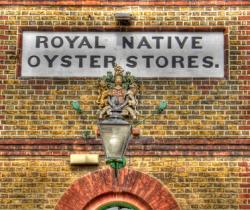 Oysters. You either love them or loathe them. The ostrea edulis of Whitstable in north east Kent has been exploited since the Romans ruled the land, and probably long before that, the trade and traditions carrying on through the centuries  locals claim that the annual Oyster Festival can be traced back to the thanksgiving ceremonies held in Norman times, and some of the activities of the festival have strangely pagan overtones that suggest a far earlier starting point. This Whitstable tradition takes place every July, kicking off with a parade on the Saturday nearest to St John of Compostelas day. The Company of Free Fishers and Dredgers in Whitstable dates back some 400 years, and can justifiably claim to be one of the oldest surviving commercial concerns in Europe.

Quite why certain points around the British coast are so particularly suited to oysters is not entirely understood: nice clean seawater is of course required, the right balance of minerals washed out from rivers is another reason for oyster hotspots, but some areas where they could be expected to thrive have few or none. Colchester , Helford in Cornwall , Poole in Dorset , and Essex s Blackwater River all have famous  and lucrative  oyster beds, but Whitstables are probably the best known in the country.

Commercially Whitstable had and has an advantageous location, being just a few miles from the pilgrim destination of Canterbury , a medieval Mallorca as regards visitors. With London and its Billingsgate Market a pretty short boat trip away too the cheap protein offered by the oyster could be distributed to the crowded capital with ease.

Oysters are sensitive to environmental factors and diseases which have meant over the years that the catch can vary wildly, sometimes disappearing almost entirely. In the mid-19th century in Britain disease and bad weather struck the oyster beds around the coast to such an extent that what had been the food of the poor (as was asparagus at one time) became a prized and expensive delicacy to be enjoyed by the well-to-do, as it largely remains today. Because of the susceptibility to disease, oysters are very carefully cleaned when caught, then put to cleanse in clean water for 40 hours or so, these days with UV light as an added bug killer.

When oyster beds are devastated by disease or freak weather and sea conditions, they are revived with stock from competing fisheries elsewhere, and such has been the way of the trade for years. To be designated a Whitstable oyster, the creature has to be taken between Shoeburyness and North Foreland, and the EU has granted the product Protected Geographical Indication status. Somewhat ironically then, many are raised from seed oysters which began life in the Breton oyster grounds, though they have grown up in the special environment off the Kent coast and are as English as fish and chips. For a true native English oyster Royal Whitstables are the thing to look out for, sold by the aforementioned Company of Free Fishers and Dredgers. Both routes produce equally delicious end results.

How to eat oysters? How to open them is perhaps a more practical matter for consideration. For the latter point, using a proper oyster knife complete with guard is useful, though whatever implement is used it requires skill and care  many a seaside holiday has been spoiled with nasty injuries when this care was lacking.

Obviously how to eat them is a matter of taste, but many would say that they are best raw, straight from the half-shell, with a squirt of lemon juice to enhance the savour and nothing more. There are plenty of recipes about for cooking oysters, but care needs to be taken not to overcook them and turn the soft flesh to expensive culinary rubber.

Those eating them raw with Tabasco, chilli oil or even horseradish may be masking the flavour so they can reap the perceived aphrodisiac qualities of the noble oyster. The jokes abound: the groom on honeymoon complaining to the hotel that he had eaten a dozen oysters the night before and only 11 worked, four not taking effect until the morning and so forth. Quite what the effect of the Whitstable oyster is in this regard is to be wondered at  the weightiest oyster grading of extra large is deemed to be over 160g, and Whitstables are very often found to be nearer the 240g mark.