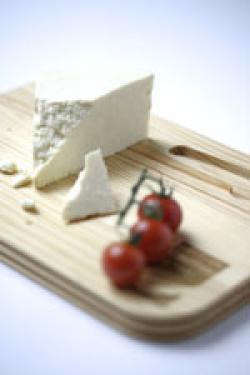 The story of Wensleydale Cheese is illustrative of the heritage behind some of Britains traditional foodstuffs.

When Jervaulx Abbey near Ripon was founded in 1156, some of the Cistercian monks who populated it had lived in another of the orders great houses in the Roquefort area of France, famous of course for its magnificent blue cheese. They thus brought with them the know-how needed to make the best of the readily available ewes milk in the Wensleydale area, where rich pastures provided then as now good grazing for sheep and cattle alike.

It was the Cistercian way to provide for themselves rather than to live off tithes and tolls, so the monks would have produced cheese for Jervaulx in their own creamery. The techniques would have spread to their tenants and then on through the rest of the valley either through direct tuition or through copying  the Cistercians were noted as agricultural and industrial pioneers, for example developing a blast furnace just before the dissolution (sadly a technology lost for hundreds of years in the brutal end to the order in England), and would in all likelihood have sought to spread their knowledge.

The cheese at that time was a blue ewes milk one, like the Roquefort it mimicked, but when the monasteries were dissolved in the reign of Henry VIII the standard version had become the white that is best known today, predominantly made with cows milk, though it was traditional for many years to include a small amount of the original ewes milk too.

Craft cheese making survived in the farmhouses of Wensleydale, and continued for centuries, though in Leyburn , Hawes , Ripon and the other settlements in the area it would just have been called cheese rather than Wensleydale, a name that attached to it in the mid-19th century when communication and transportation became easier, and a new market required what amounted to a brand name for the product.

In the Edwardian era artisan production began to give way to larger scale creameries, though the Wensleydale Cheesemakers Association founded by Kit Calvert in the 1930s for a time halted the decline. The combination of economics, food fashion, and in particular the shortage of milk during World War II saw the near extinction of farmhouse made Wensleydale.

Happily food fashions can change, and since the 1980s artisan makers have begun a comeback. Stirkes Richard III Wensleydale, actually made in Bedale , is one often mentioned in despatches by foodies.

The principal source of Wensleydale these days is the Wensleydale Creamery, owned by Wensleydale Dairy Limited. This creamery was closed by Dairy Crest but in November 1992, six months after the closure, partly fired by the potential ignominy for the whole county of Yorkshire of Wensleydale being made in Lancashire , a management buy out rescued the plant. Located in the pretty market town of Hawes, one of the loveliest in the Yorkshire Dales National Park, a town worthy of a trip in its own right, the creamery can be visited to see the rather complex production process. Wensleydale got a massive marketing boost in the mid-nineties when Nick Park s characters Wallace and Gromit gave it several mentions in various short films (well, Wallace did).

The Wensleydale Creamery produces standard and mature white versions, plus the original blue, and a smoked cheese. All are cows milk products. The flavour is mild, with a hint of acid bite in the mature white especially. Wensleydale is eaten young, matured for between a fortnight and three months, the texture becoming crumblier with maturity.

It may be heresy to say so, but it does make wonderful cheese on toast. There are other versions to be found with fruit in them, perhaps echoing the Yorkshire habit of eating cheese and fruitcake together, and cheese with apple pie. Each to their own I suppose. The most often seen of these fruity products is Wensleydale with cranberries.

The producers are currently seeking Protected Designation of Origin status for their cheese, to prevent copies from outside the area benefiting from the tradition and the reputation of their product.