The Bridie, Angus and Dundee 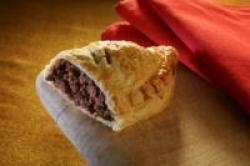 Such is the impact of the humble Forfar bridie it is arguably more famous than the town where it was first made. The bridie is a gastronomic triumph  well, it most certainly is when partnered with a lake of Heinz Baked Beans and a puddle of HP sauce. You could serve it with potatoes and seasonal vegetables, but the bridie is not a dish to pander to culinary pretense, it is Scottish pragmatism at work. A warming, filling treat.

Meat, onions, and spices, wrapped up in a horseshoe shaped pastry; the Forfar bridie has been a culinary staple of Scotland since legend took hold of a woman from Glamis called Maggie Bridie, who travelled Scotland selling foodstuffs. Whether this piece of Scottish folklore is true is anyones guess, but Maggie, if you are out there, your bridies are fantastic. Another theory suggests that the bridies were so-called due to their popularity at weddings  the horseshoe shape granting the newlyweds luck.

While people could not agree on the bridies origins, they most certainly agreed they were good. Such are their appeal, that any Scottish Cup draw that takes your team up to Forfar Athletic s Station Park is greeted with barely muted celebration, and it is not at the prospect of a freezing day in the stands and a safe passage to the next round (for most); as supplementing the Scottish football fans diet of Scotch Pies  mutton-filled delicacies which curiously stand firm through the rigours of a football match  is the distinctive flavour of the bridie.

Made from either shortcrust or puff pastry  the latter more popular these days, certainly in the mass-produced variety  the bridie is a most certainly related to the Cornish Pastie . But it is less involved, it is more spartan, more Scottish  there is no potato or carrot to be found in the bridie, such delights are far too ostentatious. Where the Cornish Pasty is offered a certain degree of latitude when it comes to fillings, the bridie is a bound by tradition  the type of meat can change, it is often minced beef, but rump steak can also be used; onion is the only vegetable on the menu. The meat is cooked with the onion, beef stock, suet and mustard powder, before being seasoned and placed in its pastry casing. The filling should be moist, but it should not be runny  after all, the bridie has to be a practical foodstuff that can be dispatched without cut-lery.

When it is not deep frying them, and as yet there have been no reported sightings of deep fried bridies, Scot-land takes its meat products very seriously. As with the haggis and the Scotch pie , making bridies is a competitive business where recipes are jealously guarded. Certainly until the annual bridie championships, run by the Scottish Craft Butchers, get underway. 2008s winners have already been declared: in first place, Stuarts of Buckhaven, Buckhaven; in second, Grossetts of Tayside, Dundee ; and in third, Davidson Specialist Butchers, Burn Lane, Inverurie . The win for Stuarts of Buckhaven is a remarkable achievement given that they win the annual Scotch pie championship nigh on every year. The town of Buckhaven might be modestly proportioned, but it holds legitimate claims to the title of pie capital of Scotland. In Forfar itself, JAS McClaren & Son have been making bridies since 1893, and rumour has it, they are rather good at it. The bridie is also a staple in the mini-classic of Scottish cookbooks, Maw Broons Cookbook.

Forfar resides in the county of Angus , a former Royal burgh, the town has a population of around 13,500 and sits just off the A90 between Aberdeen to the north, and Perth to the south.