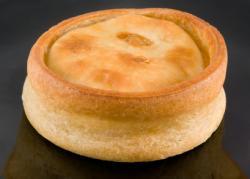 The Scotch pie is more than a pie. Its an icon. You could say it is an institution but that is something of an understatement. There is nary a Scot to be found, save for the odd vegetarian, who has not partaken of the pie at one stage or another. And a number of these vegetarians may have turned vegetarian after experienc-ing some of the less presentable renditions of what is a Scottish culinary classic.
Indeed the Scotch pies importance transcends the kitchen, the plate, the whole aura of gastronomic pre-tense. The Scotch pie is a symbol of nationhood. It can be awful, and commonly it is. Yet, at its best, its pastry  boasting three different textures: crunchy, moist, and just the right side of soggy  hides some wonderfully seasoned mutton that when baptised with a ladle of baked beans formed the basis of every childs favourite lunch.
The Scotch pie is made with a thin basin of pastry that endeavours to be moist on the bottom, and crispy on the top; it is then filled with minced mutton, generously peppered and mixed with rusk, before being topped by a pastry lid. Again, like all of Scotlands favourite meals, it is both delicious and practical; the Scotch pies outer shell stands proud of the meat and pastry within, leaving space for a topping of gravy, peas, baked beans, or all three. The Scotch pie is portable. Ask any Scottish football fan: you cant hold a hot dog because it will slip out of your hand when you celebrate a goal; pasties and steak pies tend to fall apart; pizzas dont even go there  the Scotch pie has been an essential part of match days, ever since its popularity rose in the aftermath of the Industrial Revolution .
The Scotch pie is, and should be, a cheap meal. That is not to take anything away from its appeal, but it is perhaps not made for the sort of public makeover that the black pudding , Arbroath Smokie or the haggis has received in recent years. It is in essence, the food for the working classes that could unite all Scots. That mut-ton was favoured over beef or lamb was crucial; mutton is cheap. Sheep are everywhere in Scotland, and so like the haggis  which uses the sheeps pluck and its stomach  the Scotch pie makes use of the most readily available meat, and bulks it up with rusk. And even more so than haggis  for some people, foolishly, are a bit squeamish when it comes to eating offal  the Scotch pie is probably Scotlands most exclusive dish, inviting everybody of all classes and creeds to devour it. Even the vegetarians after all, weve all had the odd pie that seems suspiciously free of meat. Nowadays, beef is more available and is used as standard: the Scotch pie is on the cusp of what could be a beautiful, if somewhat awkward evolution, its fillings taking on new flavours.

It is the artisan producer, the small-batch baker, the local butcher, who are truly the lords of the peoples pie. The Scotch pie championships are the most significant vote in Scottish society  Holyrood isnt even close. The ideal Scotch pie should have a well-fired outer crust, the crunch of the first bite is essential, and if it is to withstand the rigours of having a steaming mound of meat and pastry in the middle it needs to be tough. the meat must have a bit of charm and personality to it, gently spiced and gloriously savoury. Ultimately, the pie should taste good when either hot or cold.
It is no surprise to serial pie connoisseurs that Stuarts of Buckhaven, the founders of the Scotch Pie Club, should dominate the competition through the years. But 2008 saw WF Stark of Buckhaven, succeed Stuarts as champions of the Scotch pie, and a former employee of Stuarts, Amos Smith, collected the award. The Scotch pie will remain the peoples champion. Though it may be embracing change  mutton supplanted by beef, Thai flavours, etc.  goats cheese and caramelised onions may be some way off, and the Scotch pies immediate future is one of studied atavism. The only question is whether the beans go to the side of your pie or on top of your pie. These decisions dont get any easier with age.