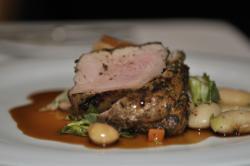 It feels strange advocating the eating of what is an endangered species, but consumption of premium price (and delicious) pork from the Gloucester Old Spot would make it more attractive commercially, and thus it is to be hoped more would be farmed. With fewer than 2,000 pigs globally, of which at least half are in the UK, the Gloucester Old Spot is definitely a minority animal compared to the vast numbers of pink porkers raised worldwide.

Why should the breed be promoted? In addition to the genetic argument  the wider the gene pool the more security for animals, and the better chances of natural improvements  there are historic and culinary reasons for supporting the Old Spot. As a breeding animal the Old Spot brings a certain toughness that means it can be reared outdoors with few if any problems, able to fend for itself in orchards on windfall fruit  indeed it has the nickname Orchard Pig. As a good milk producer, famously careful mother, and prolific breeder, the Old Spot has much to recommend it to breeding programmes.
The historical reason is this was the first pedigree pig, the Gloucestershire Old Spots Breed Society having been formed in 1913. Until then while cows and horses were considered gentlemanly animals, worthy of careful breeding, pigs still had the stigma of being a mucky peasant beast. Found particularly around the Berkeley area in Gloucestershire, the Old Spot prospered for centuries on the local apples and the whey from the cheese industry in the region.

In culinary terms the Gloucester Old Spot has much to offer too, though the fat that marbles its flesh, and the thick layer of back fat typical of the breed, are considered not to modern tastes by some. Chefs and gourmets know that marbling in meat is essential to baste the lean as it cooks, and carry the flavours of meat. The pigs fat physiology also lends itself to top quality crackling when cooked by a careful hand.
The Gloucester Old spot then, shaped like a huge artillery shell with a barely discernible neck, its massive lop-ears drooping like a moody teenagers hair, the random black spots marking it as different from the poor indoor pig, is something to be cherished. Because of its docile temperament and easy outdoor rearing it has become the pig of hobbyists, and is sometimes to be found in farm shops. If you do find Old Spot pork, or bacon, try it. There is a real difference in flavour, and as we are urged to reduce our meat intake, it makes perfect sense to ensure that when we do tuck in to flesh it is of the highest quality and savour.