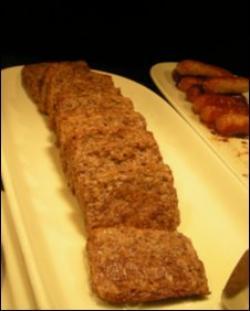 Traditional Scottish breakfasts are a contrary beast. On one hand, porridge oats form the mainstay of a breakfast high in fibre, with the sort of GI figure that gets the health conscious all glassy-eyed just thinking about it. On the other, there is a pre-dereliction for a fry-up. Not necessarily a full one though, for Scotland has one sausage that is just as home nestling in a crispy morning roll as it is squeezed on a plate alongside black pudding , potato scone, eggs and bacon. And that sausage is the inimitable Lorne sausage.

Ask any exiled Scot: it's the Lorne sausage that they crave most. Scottish ex-pats in Australia may get excited when they see the steakette. But it is not the same, it doesnt even compare. Yet the Lorne sausage is a bit of a freak: its flat. No casing, it is just a square patty cut from huge blocks of sausagemeat  hence why it is often referred to as a square slice, or sliced sausage. As ever with traditional Scottish foodstuffs, there is a whiff of mystery as to where the Lorne sausage originates. It could take its name from Lorne, the village in Argyll and Bute; but the theory that proposes Tommy Sausages are the boys Lorne as the inspiration behind the Lorne sausage is more convincing.

Tommy Lorne was a Kirkintilloch comedian and a big fan of sausages. He was not a butcher; it was most likely that his fondness for this new shape of sausage merely influenced a butcher to christen his sausages in Lornes name. This curiously flat sausage was hitherto undiscovered until Lorne was bedecked in ill-fitting Highland dress and bringing his high-pitched catchphrases to Scotlands theatres. Lornes jokes may have had a select appeal  think of an eccentric talking shortbread tin, colouring the air with inane phrases and you are half-way there  but the sausages named in his honour became the nations official breakfast sausage.

The Lorne sausage is a mixture of minced pork and beef bulked up with rusk, and spices such as nutmeg and ground coriander. After mixing, it is transfered to a long, almost loaf-like tin and put in the freezer to set for half-an-hour or so. It can be sliced then frozen, or kept in the fridge and sliced when needed. While the green tea, beans and pulses brigade may baulk at its fat content, purists argue that to be a successful sausage it needs to be twenty per cent fat. Certainly, when shallow frying the Lorne in a non-stick pan it does not need any further oil  the healthiest option would be to grill it.

As for serving the sausages, one orthodox suggestion would be between two slices of lightly buttered bread from a Mothers Pride plain loaf, and it is when in a sandwich or a roll that the Scots pragmatism is again to the fore. Normal linked sausages may have their skin to keep them moist, but in they are prone to escaping after one bite: Lorne sausages are going nowhere. Aside from the spartan white dough of the plain loaf, the aforementioned crispy morning roll, like those baked by McGhees and Mortons bakers, are the ideal com-panion, and, like the Lorne itself, are unique to Scotland.
The Lorne sausage; Scotlands square meal  a reassuringly unorthodox sausage thats defied and survived through food-fads, Brussels sausage bothering bureaucracy, and put the kibosh on many a diet.