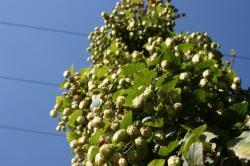 Ales have been drunk in Britain for many centuries. Refreshing and intoxicating, they were also far healthier than the water in many places as they had been boiled in the production process. Kent has always been known for the quality of its beers, although what distinguishes them today - hops - was not used in brewing when the county first got a reputation for its brewing.

Hops were introduced to England by Flemish immigrants in about 1530, rapidly being taken up in counties where the climate suited them particularly well: Essex , Surrey , Suffolk , and of course Kent. Hops became one of the great agricultural products of the county of Kent, hop gardens and the oast houses where they were dried forming part of the distinctive landscape of the Garden of England.
Kent is home to what is reputedly the oldest brewery in England, Shepherd Neame of Faversham, still based in the brewery that opened its doors in 1698. Others have come and gone, but the county now has a thriving micro and smaller brewery sector, with the likes of Ramsgate Brewery of Broadstairs , Westerham Brewery of Edenbridge , the Whitstable Brewery Company, Hopdaemon of Newnham, and Nelson Brewing from Chatham .

It is the hops that give Kentish ale its distinguishing characteristics. Originally it was probably the preservative nature of the hops that gained them acceptance over the other herbs and flavourings  like honey - once used in making beer. Shepherd Neames best known  and strongest  bitter, Bishops Finger, uses three varieties: Goldings, Target, and Challenger, all grown in the county of Kent. The mixture of hops used produces a decidedly bitter beer, with a certain flowery edge, and the real taste of hops. The same brewery also uses Omega hops grown locally in other brews, and has developed single hop beers produced for the spring and summer seasons, another demonstration of the brewerys mastery of its subject. Westerham Brewery similarly produces Bramling Cross beer, triple-hopping it with the Bramling Cross variety.

A great part of the brewers art is knowing how to play tunes with the hops available: Goldings, for example, is famed for giving the enticing aroma of good beer; target is used for bitterness. Kentish ales have traditionally been full flavoured and dry because, presumably, of the ready availability and relative cheapness of hops in the area.

Kentish brewing has reached out way beyond its own county and country. In Sydney Australia John Tooth from Cranbrook in Kent founded a brewery in the first half of the 19th century, and the brewery still produces Kent Old; and in Adelaide the brewing district was known as Kent Town, and Kent Town Real Ale was re-launched at a brewery there in 1989. It is probably only right then that the New World has given something back to the brewing industry in the oldest county  Tonie Prins of Hopdaemon hales from New Zealand, and has now settled in Kent.

The individuality of Kentish Ale, and Kentish Strong Ale, has been recognized by the EU, which has awarded both Protected Geographic Indication status. Which is definitely worth drinking to.