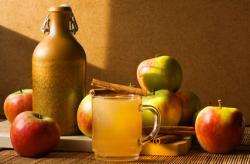 The late great beer writer Michael Jackson believed agriculture began to enable grain to be grown for brewing. Logically the simpler process of making basic farmhouse cider from crab apples could have predated that.
Herefordshire has reputedly had cider making since before the Romans arrived, though it is said to have been the Normans , who themselves have a wonderful cider making history, who refined methods in this country and county. The climate  relatively warm and sheltered inland, and being on the western side of the country with plenty of rain to swell the fruit  is suited to the craft, and the refreshing quality of the drink was in turn suited to the Herefordshire agricultural labourers who until late in the 19th century were often part-paid in cider.
In spite of the damage done during WWII when many cider orchards were grubbed up to allow food to be grown, and the drink becoming unfashionable for a long time (how things have changed recently!) Herefordshire Cider is still thriving, the acreage now approaching 10,000 with more being planted every year, though sadly some of the traditional varieties have been lost  where now is the variety Slack my Girdle, which surely would have been worth preserving for the name alone?
Percy Bulmer and his brother Fred built their cider empire in Hereford , though it went out of the familys hands some time ago, and their story and the story of local cider-making is told in the Cider Museum in Hereford.
Cider is a fairly simple drink to make, harder to make well. The basic process is grow your apples, pick and mature them a bit to intensify the flavour, crush them to obtain the pulp, squeeze the pulp to obtain the juice, and let the juice ferment with natural yeasts.
It can be a wonderful drink when made by skilled hands, sharp and fruity, foul when made badly. There is an art to blending the apple varieties to arrive at a specific balanced taste, though some places sell single variety ciders to allow connoisseurs to taste the differences. Traditionally Herefordshire relied on bittersharp apples, at the tarter end of the scale, giving a tangy and thirst quenching drink.
What was once on the way out is now booming again, and bless the EU, Herefordshire Cider now has Protected Designation of Origin Status. Cheers!