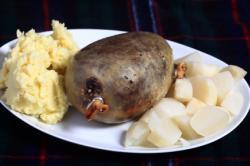 Perhaps the most iconic of all of Scotlands dishes, the haggis is an intriguing mix of sheeps pluck, oats, suet, onion and spices. Traditionally wrapped in a sheeps intestines before cooking, the haggis has seen some of the more timid diners retreat from its delights  the heart, liver and lungs of a sheep maybe too much for some. But they are missing out on a true delicacy, with a flavour thats a unique taste of Scotland. In fact, its the stuff of legend: there can be few Scots who have not regaled our American cousins with tales of the haggis hunt  the haggis taking on a mythical persona, a vicious wee beastie, elusive and ill-tempered.
The haggis is as Scottish as rain, whisky and shortbread. Scotlands most celebrated poet Robert Rabbie Burns saw this rather bulbous sausage as a savoury pudding to muse over, his Ode Tae A Haggis becoming a toast at the thousands of Burns Suppers that take place in his honour on the 25th January. At such affairs, the best in Scottish cuisine is mixed with Burns poetry and a dram or two, with the ceremonial address to the haggis a precursor to plate laden with haggis, neeps n tatties  the latter mashed swede and potato respectively. The Gravy at a Burns Supper is suspiciously amber, a wee whisky proving to be a most convivial condiment. A bottle of malt is usually the first casualty of Burns Night, for there are numerous and hearty toasts to make. Any excuse
The origins of the haggis are unclear  there is a school of thought that says the dish originated in Scandinavia, and was brought to Scotland during the Vikings many excursions in the 12th Century. Some say the French may have dreamt it up; but there is no doubt that it is Scotlands now. And it makes sense. That haggis is the often discarded offal, with a scattering of the ubiquitous oats, the finger points to the canniness of a Scot. Haggis was cheap to make; to this day, it does not cost the earth for a haggis  even a good one. Macsweens haggis are one of the finest brands to be readily available in supermarkets throughout the country, and, established in 1953, in Bruntsfield, Edinburgh , by Charlie and Jean Macsween theyve remained faithful to a family recipe with a wonderful, traditional haggis, resplendent in its animal casing. The company also produce a vegetarian haggis.

Like many dishes the haggis has evolved. Though originally it would have made a cheap staple for farm-hands, or indeed a dish improvised centuries ago while men were out hunting in the glens, it has undergone something of a makeover. There was a time when the haggis just wasnt sexy  some may say its not now, but they are wrong. Endorsement by many TV gourmets  Clarissa Dickson Wright of Two Fat Ladies fame has confessed to always having a Macsweens haggis in her fridge  the haggis is being used in more avant-garde Scottish cuisine, and in some cases it has been adopted by Scotlands Indian and Italian population. Many Indian restaurants serve haggis pakora, warming Indian spices proving a comfortable bedfellow of the white pepper and nutmeg of the haggis. And yes, it has made its way on many a pizza; which, on balance, makes a lot more sense than pineapple. More commonly, haggis is served as a stuffing; chicken breasts stuffed with haggis is fast becoming a culinary cliché, such is its popularity. And of course, the haggis has succumbed also to Scotlands fish n chip shop tradition of coating everything with batter and deep frying it.
Haggis now incorporates one of Scotlands most prized game meats; venison. McKean haggis making both a smoked and unsmoked haggis with venison from the Royal estate of Balmoral . The smoked venison makes a richly flavoured starter, and is wonderful partnered with the peppery notes of a watercress salad. Butchers annually compete in The Scottish Haggis Masters, a competition run by the Scottish Federation of Meat Traders; the 2007 prize for best haggis fell to Dalbeattie Fine Foods.