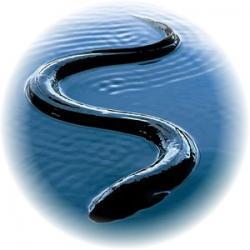 The elver is a remarkable creature, spawned in the Sargasso Sea but returning 2,000 miles and more to the rivers and streams of Europe in a journey that can take three years. It deserves respect, but sadly stocks have diminished enormously over the last three or four decades, now being perhaps 10 per cent of the levels after WWII .
A good source of protein and a delicacy to boot, the elver has been fished from the Severn with fine nets and traps for hundreds of years. Some form of control is exercised by the Environment Agency, with licensing of elver fishers, but greedy poachers buck the system and use illegal trawl nets to catch everything that is passing up the river. And no wonder, with a kilo of elvers fetching £250 and above. A tiny restaurant portion of 20g can cost £50, such is the rarity and the excellence of the elver.
Problems with fishing for elvers are not new - in the 1870s it became a huge political issue in Gloucester and Worcester , a tale recounted in William Hunt's short book The Victorian Elver Wars.
In times past elvers were far more plentiful, and like asparagus and oysters they were once the food of the poor as well as the rich, but today the dish is for the super-rich.
With the abundance of elvers in the Severn which runs through Gloucester a traditional method of cooking them developed there: the cleaned elvers (rinsed several times in salty water to get rid of their slimy coating) are cooked in the fat remaining after bacon has been fried, their clear thread-like bodies turning an opaque white in the brief time it takes to cook them. Beaten egg is added to the pan and mixed in with the tiny fish, then left to form into an omelette which is seasoned and served on top of the bacon which yielded the cooking fat. Magnificently simple and utterly delicious.
It is vital that the elver be preserved in order that these fascinating creatures, and such dishes, do not disappear forever, and with the elvers going the eels into which they develop would be lost too. Where would the East End be without jellied eels ? And we'd be the poorer for losing Lancashire smoked eels too.

From Michael on 22nd February 2010
Interesting article about elvers,pity this type of food is not protected for the indigenous people like in other parts of the world, instead it is sold off to the highest bidder