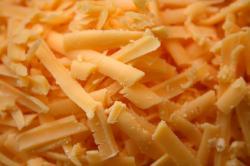 In a country that produces so many wonderful traditional cheeses, it is tragic that for many Britons cheese means plastic wrapped industrially produced cheddar . Once the timid venture beyond that ghetto, it is still sad that they may be faced with equally anodyne versions of the great British cheeses, like Double Gloucester. True artisan Double Gloucester has real character, a nutty savour that is all its own, making it a pleasure to eat.

Gloucestershire encompasses the Cotswolds and part of the Severn valley, lush areas that not surprisingly provide excellent grazing. Add to that fact the local Gloucester cattle breed which produces milk well suited to cheese making, and the ingredients for a cheese making tradition are in place. This tradition can be observed in some of the remaining old farmhouses in the region, around Cirencester , Dursley or Cheltenham say, where a third floor would have contained a cheese room, and may still do so.

There is another traditional aspect to Double Gloucester that must not be omitted in any review of the product. This is the Coopers Hill cheese rolling event , held every Whit Monday at a site between Gloucester and Cheltenham, when four large cheeses are rolled down a steep hill, with a merry crowd in pursuit. This is said to be derived from the need to mark field or farm boundaries, though how cheese would be involved is rather mysterious. It is even suggested that the strong rind on Double Gloucester was developed to suit the cheese rolling, but that seems extremely dubious.

Why is Double Gloucester called double? There are two theories. The first, and surely most likely, is that it is made from two milkings, the morning and the evening. The other possibility is that it was simply thicker than the other cheese made in the area, unsurprisingly called Single Gloucester.
As with Red Leicester , the orangey-red hue of the cheese comes these days from annatto, but in times past this would have been produced using carrot juice, beetroot juice, or some suggest saffron, though the expense would have been enormous. Again as with Red Leicester, why the colour has been used is open to debate.

Double Gloucester is arguably at its best using unpasteurised milk  whole milk of course, though nowadays far less likely to be from Gloucester cattle than was once the case. It is pressed in the final phases of cheese-making, giving the end product a firm texture, while retaining a creamy flexibility.
Describing flavours is notoriously difficult, so best to say that a well-matured Double Gloucester (they are generally matured for at least three months, and often up to eight and even beyond) is rich, with a good depth of flavour, and a nice acidy bite to it. Best to try some from a good quality source for yourself and see what you make of it.

To cheese aficionados one last comment may seem sacrilege, but Double Gloucester makes wonderful cheese on toast, and great Welsh rarebit , particularly if ale is used in the recipe  a drink with which the cheese either cooked or not has a great affinity.