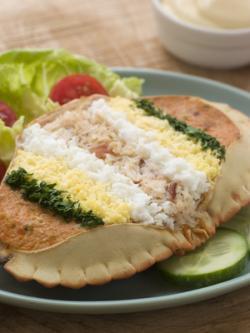 A Cromer crab, freshly caught in the clean waters off the seaside resort on the North Norfolk coast, simply scrubbed, boiled and dressed, is one of the greatest treats possible for British seafood lovers.

These days there are only about a dozen boats out of Cromer looking after some 200 crab pots, so the catch of true Cromer crab is not huge. There is concern for the future of the industry too because the gradual warming of the waters around Britains coast brings the prospect of the velvet crab, better suited to warm conditions, displacing the brown crab, cancer pagarus.

It used to be that the crabs were only caught during the summer months, but the season is not so restricted these days, perhaps another cause for concern.

Cromer crabs are prized because they tend to have a greater proportion of white meat to brown, and because their flesh is ever so slightly sweeter than that of crabs caught elsewhere along the coast.

Various reasons are put forward for the superiority of the Cromer crab. There is a chalk shelf just off Cromer, which may have an influence on the diet of the creatures. They are caught relatively young  a shell width of 115mm is the legal minimum  and the spawning grounds are close to Cromer.

For those who prefer more sophisticated dishes there are many versions of crab gratins that make good use of the meat, often served in the shell. The flesh goes well with pasta, makes great soufflés, and is fabulous in traditional potted crab dishes. But for real aficionados plain boiled with a dollop of mayonnaise and some brown bread takes some beating.