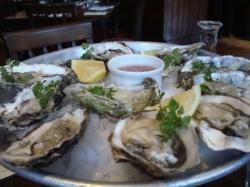 It was the Romans who popularised oysters in this country, and established their cultivation. The rich waters off Camulodunum, or as we know it Colchester , were particularly suitable to the raising of this most delicious of seafoods.
Partly to raise revenue, partly to help control the harvesting of the oysters off Mersea Island to the south of the town, Richard I in 1189 granted the Borough a charter giving it control of the fishery. Over the next 800 years and more this control has sometimes been actual, sometimes nominal, a marine cash cow for the council. At times the Pyefleet Channel dredgers themselves, though still paying a licence fee, took all the revenue, but at the end of the 19th century the authorities went to law to wrest the power (and a share of the profits) back.
Every year, on the first Friday in September, a ceremony is held in the oyster bed waters off Colchester, to celebrate the bounty, there, and to mark the council's claim. And it is a claim worth staking, given that the Colchester native oysters, Ostrea Edulis, sell for about three times the price of the much more common rock oyster. To further the marketing of the Colchester variety the producers have applied for the Protected Geographical Indication already enjoyed by Whitstable oysters .
So on that first Friday in September the Mayor, Serjeant, and Chief Executive of Colchester set sail in a traditional barge, covering the short distance between Brightlingsea and the Pyefleet Channel. A proclamation dated 1256 is read by the Chief Executive, its flowery language embellishing the simple claim to the fishery rights. The Mayor, or a helper, dredges "the first oyster", which the mayor consumes, and then comes the odd part: the loyal toast is drunk in gin, with a piece of gingerbread to go with it. Nobody seems able to provide an explanation for this seemingly inappropriate choice of drink and nibble - perhaps they were an ancient gustatory insurance policy against the danger of a bad oyster, to help the mayor cover his reaction to such a shock, the gin also providing some instant treatment of the offending mollusc.
The loyal toast is made by the Mayor, and a message sent to the reigning monarch: "According to ancient Custom and Charter dating back to Norman times, the Mayor and Councillors of the Colchester Borough Council will formally proclaim the Opening of the Colne Oyster Fishery for the coming season and will drink to your Majesty's long life and health and request respectfully to offer to your Majesty their expressions of dutiful loyalty and devotion."
Niceties over with, the dignitaries and their guests can get down to some serious oyster consumption on board, though the Colchester Oyster Feast in October is even more luxurious. Oysters are sometimes seen as for aficionados only, but the flavour and texture of a fresh salty oyster is beyond compare, and of the oysters available in Britain the natives are arguably the finest, not to be spoiled by fancy cooking or fierce accompaniments