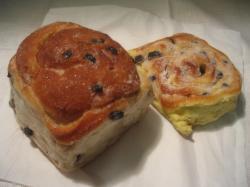 The Chelsea bun  the best of all buns according to Jane Grigson , is a rare instance of a traditional foodstuff being clearly associated with just one source, in this case the Bun House in Chelsea. This establishment, in the Pimlico Road near Sloane Square, gained fame in the early years of the 18th century, to such an extent that it was patronised by the royal family, though Jonathan Swift was less enamoured n 1711 when he tried one and it was stale.
The Chelsea Bun baked and consumed on the premises of the Bun House was it is said renowned for its lightness, but the Chelsea bun of today is rather a substantial and filling thing. Made with a dough mix enriched with eggs, a hint of lemon zest, and a hint of cinnamon they are certainly not for slimmers. The rolled out sheets of dough have a filling of currants, brown sugar, and perhaps mixed peel, plus another hint of cinnamon. Ground allspice can be used in place of, or in addition to, the cinnamon, but there is something rather Georgian about cinnamon as a flavouring that makes it more desirable in this 18th century confection.
The filled sheets are rolled up Swiss roll style, and then cut into slices about 50mm wide. These slices are placed cut side down on a baking sheet and left to prove. The secret of the characteristic square shape of the bun is getting the spacing between them right  they should nearly nudge up against their neighbour when they get towards the end of their proving. At this point they are dusted with caster sugar on top and put in the oven, where the last few millimetres of expansion occurs, the neighbouring buns butting up to one another and restricting further movement, hence the square shape.
When baking is complete the squares are brushed with a glaze  caster sugar and milk for example  left to cool a little, then torn apart. Some bakers put icing on the top rather than glazing them, but though this may add to the indulgent nature of the treat, it is not considered entirely authentic.
The Bun House was famous for selling its buns hot from the oven, when of course their aroma would be at its most enticing, so making them at home is worthwhile to get the same experience. Both Elizabeth David in English Bread and Yeast Cookery and Jane Grigson in English Food give very clear and easy to follow recipes