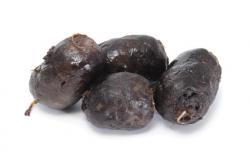 In the past it was said that we could eat everything of a pig except its squeak. The black pudding doubtless came about as a method of using up the pig's blood, as the fat employed in the dish could find many a home elsewhere in plain cookery.
As with so many other dishes, however, products made out of necessity bloomed into delicacies, though the more squeamish would maybe want to deny the black pudding falls into that category. They would be wrong, and should try one by champion black pudding maker Andrew Holt of RS Ireland in Haslingden near Bury . I have also eaten a wonderful starter at Rules in the Strand made with black pudding and piccalilli, so if it is good enough for London's oldest restaurant...
Black puddings are generally sold in the form of a sausage, their black casing containing a mix of pig's blood (or these days more likely from another source), pig fat, cereal, plenty of salt, onion, and flavourings. The herbs used vary from one maker to another, each recipe well guarded, but in a Bury black pudding you are likely to find pennyroyal, its best known secret ingredient, along with thyme, marjoram, pepper and celery seed.
Why Lancashire should have retained a love for the black pudding when other areas largely eschew it is not clear. It was a cheap food for the industrial masses, and easy to prepare in the basic kitchens of the poor, and it was also a street food in the county palatine long ago as it still remains today on Bury's famous market . The black pudding stall there serves them hot with mustard, the smell drawing even the faint hearted to give it a go. And it is worth it, a well made pudding is delicious.
These days the black pudding is most likely to be found as part of a breakfast, but it deserves a more prominent place in our national cuisine. Eaten with mashed potatoes and lashings of Coleman's mustard it makes a fine supper dish. For the more adventurous it can be crumbled into stews to give them body. And in France I have seen boudin noir, the cereal-less version made and revered by our continental neighbours, used on pizza, the herby flavour suiting that equally peasant food as well as any spicy pepperoni.

From Peter J Ainscough on 7th October 2009
I have eaten black pudding in many parts of Britain - the Scots serve it with their very substantial form of breakfast - but I have never found one to rival those I have eaten in Lancashire. The seasoning is largely a matter of personal taste. I love them simply boiled for a few minutes and served steaming hot with Colman's mustard, as suggested in the article. Thank you. It had my digestive juices flowing just reading it!