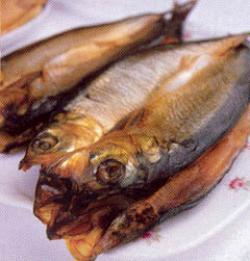 In the days before refrigeration, fish and many other foods were preserved by salting and at a rather later period by smoking. Out of this act of necessity have come some of the great British delicacies  Scottish smoked Salmon; Arbroath Smokies , Isle-of-Man kippers , and not least the Bloaters produced in Great Yarmouth  the Red Herring produced there would be hard to describe as a delicacy, reflecting more the drive to preserve food than enhance flavour.

Great Yarmouth was for centuries the centre of the British herring trade, even its coat of arms bearing the tails of three herrings (attached to the bodies and heads of three lions). In the 19th century and into the 20th the town filled with Scottish fishwives who could gut and clean herring faster than the eye could follow. It is said that at the height of the herring trade it was possible on some days to walk across the Yare on the herring drifters so closely packed were they.

Growing up in the sixties in Gorleston , just over the river from Yarmouth, there were still herring vessels to be seen in the autumn, when the shoals of silver darlings had descended to the East Anglian coastline, having made their way gradually south since appearing off northern Scotland in early summer. But sadly this is not a sight to be seen today  the bony fish is not a favourite with the British these days, though increased awareness of the benefits of oily fish may change this yet. And a trip to the fascinating Time and Tide Museum in Blackfriars Road gives an amazing insight into Yarmouths' maritime heritage.

Red Herring preceded the Bloater, being produced from the 13th century according to Colin Spencer in his brilliant epic British Food (published by Grub Street). They were salted hard first, then smoked for up to 48 hours to dry them and give them great keeping qualities: many were exported to the West Indies as food for the slaves there, and even today the hard smoked fish almost immune to the climate are exported to Africa, but in the early days of the industry they provided food for fast days for those who lived a long way inland from the fisheries. The lengthy smoking process renders the fish hard, and as the name implies, a notable red colour. The expression red herring beloved of detective stories comes from the idea of using a red herring with its intense aroma to put hounds off the scent, and it appears in another delightful phrase that demonstrates how it was regarded as a thing apart  neither fish nor fowl nor good red herring.

For gourmets the Bloater has far more to offer. This was according to Yarmouthian legend a chance discovery, made when a fisherman or fish dealer (one named Bishop is sometimes cited) threw salt over some herring to preserve them temporarily, and then hung them in his chimney for a while. As the Red Herring had been about for centuries before the Bloater (probably a product of the 17th century) this is almost certainly nonsense.

To make a Bloater ungutted herring are used, lightly salted, generally for less than two hours, and equally lightly hot-smoked, for the duration of a shift  eight to 12 hours. Because of this delicate treatment they are at their best eaten straight after coming from the smoker, and certainly within a couple of days. This shelf-life was extended in the days before refrigeration by making pastes of them, sealed in jars beneath oil or butter, and this paste is still worth the effort of buying or making, simply spread on bread and butter or better still on warm toast. The Bloater industry was probably at its height in the railway age, when fish loaded onto trains at Yarmouth Vauxhall or Southtown were despatched to discerning markets throughout the country.

The specialness of the Bloater comes from having the guts still in the fish when it is smoked, giving the flesh a flavour that some describe as gamey, but which is perhaps better called rich and complex. It is a special treat if the guts contain the roe, which is definitely the cooks treat if found. The fish can be eaten without further cooking, but is often re-heated in the oven with a bit of butter in the cavity. Others would prefer to have them grilled or fried. Mrs Beeton suggested slashing the skin to speed the cooking through, and thus avoid drying the fish out.

There is still at least one curer operating in Great Yarmouth, and the towns affection for the food is seen in the local football team being nicknamed The Bloaters. More of the product is sold in the Mediterranean than in Britain  where doubtless British foodies will have tried it and commented on how wonderful this exotic delicacy is.

The product can though be supplied by mail order or over the net these days, and makes a great alternative to kippers for a traditional Sunday breakfast. But better still, if you ever find yourself in the Yarmouth area, follow your nose to track down the delicious aroma of smoking herring  roughly level with the Pleasure Beach, on the other side of the spit of land called the South Denes.