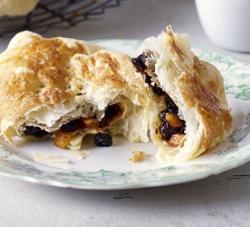 The Banbury cake is a pastry with a wonderful and rather exotic history. Gervase Markham published the recipe for a version of the Banbury cake in 1615, but it is thought by many to date from the Crusades , when those few who survived the fighting and, far more dangerous, the disease, returned with new culinary treasures, one of which was the forerunner of the Banbury cake.
Such pastries (though dare one say it rather lighter) are common in the Near East, and indeed would have been encountered by those who had taken the cross. The Banbury cake is made with puff pastry, and filled with a mince mixture known as Banbury meat containing orange and lemon peel, currants, sugar, cinnamon and allspice, and flavoured with rosewater, all in medieval times strange and fascinating items. These are mixed with butter to give a consistent filling.
These days rum is often used in the filling, not exactly a medieval ingredient, though the Arabs of course were the ones who developed distillation.
Traditionally Banbury cakes are made in an oblong shape, and intriguingly they are equally traditionally sold in threes. Perhaps because of the rosewater they keep very well, to such an extent that in the days of empire they were exported to India and even Australia.
Don't believe anyone who says they're just Eccles cakes by another name. Eccles cakes use shortcrust pastry for a start, and Banbury cakes were around long before their northern cousins were first noted.
Ben Jonson mentions them in one of his plays, and is known to have visited the town. But then Banbury at one time was a great trading centre, hosting a famous fair that has bequeathed us the nursery rhyme about Banbury Cross.