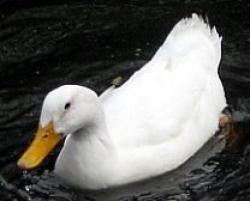 Aylesbury , the county town of Buckinghamshire , has had a reputation for duck rearing since the 18th century, the well fleshed bird that takes the town's name having been brought into being by careful breeding in the early 18th century. So proud of its heritage is the town that the bird features on its crest.
The town was well placed for duck rearing, within 40 miles of Smithfield in London , so the driven ducks (with traditional tar and sawdust protection renewed daily on the way) would arrive in fine fettle, not having lost weight (and value) en route.
As well as being well fleshed the Aylesbury duck has some distinctive features and culinary advantages. As regards features, it has a pleasantly pink, fleshy coloured beak, beginning high on its head. The feathers are pure white, a long way away from its mallard ancestors. These feathers give the bird a further commercial allure denied certain other breeds - they leave the plucked bird looking whiter and neater. Historically white feathers were also commercially advantageous in that they were in demand for mattresses and pillows.
In culinary terms the well-bred and fed Aylesbury is rather less fatty than say Peking ducks, with which they were often crossed after the latter type was introduced in the last quarter of the 19th century in Britain. Pure Aylesburys are getting to be a rarity, which as they are good egg layers is a pity. The pure Aylesbury has flesh which is more delicate than other breeds, less stringy and tough than its rivals.
The Aylesbury is well suited to a variety of traditional British duck dishes: stewed with peas, served with onion sauce, in a pie, or stewed with cabbage, or perhaps more elegantly with a cherry sauce to cut through the fattiness - serendipitously there is a family in the Vale of Aylesbury still rearing the creatures that their ancestors first farmed in the 18th century, and still letting them feed naturally among their cherry orchards.