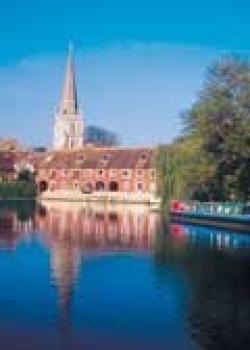 Only 100 kilometres from London, the White Horse Country lies between the Ridgeway and the River Thames and stretches from the edge of Oxford to the threshold of the Cotswolds. Its enchanting landscape is marked by a mysterious pagan past  the very name comes from the oldest chalk figure in Britain dating back to around 1,000 BC.

Wander through tranquil countryside to waterside pubs, pretty villages and elegant houses in an atmosphere that belongs to another time. The White Horse Country has a network of footpaths that connect two national trails  the prehistoric Ridgeway slips across open downland and the Thames Path leads you on lush willowy walks. It is also an area rich in literary and artistic associations.

The principal town of Abingdon is a thriving market town on the River Thames with many historic buildings and it has been acknowledged as Englands oldest town with a continuous settlement dating back to the late Bronze Age. The 7th Century Benedictine Abbey dominated the town for centuries with some buildings remaining. Home of the world famous MG sports car, for 50 years the MG was Abingdons major industry, until production ceased in 1980.

The engaging market town of Wantage nestles under the ancient Ridgeway  possibly the oldest road in Europe. The town is famed as the birthplace of King Alfred the Great. Faringdon has panoramic views from its pretty perch on the golden limestone ridge between the valleys of the River Ock and Thames. For centuries Faringdons hotels have been welcoming visitors.

There are many country houses within the Vale. Among the most splendid are Buscot Park, Ardington House, Ashdown House, Kingston Bagpuize House and Milton Manor. The main historical sites include the Blowing Stone, Dragon Hill, Faringdon Folly, Great Coxwell Barn, Uffington Castle, the Wayland Smithy and the White Horse.