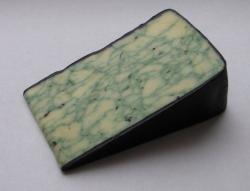 Much though all right thinking people (i.e. those whose views match mine) should deplore such concoctions as cheese with vanilla, chocolate or cranberries added, cheese made with additional flavourings has a long and generally noble history. Sage Derby is one of the best.

A cows milk cheese, pressed to give a good firm texture, Sage Derby was made in the 17th century, if not before. The cheese has a lovely marbled aspect, derived from the inclusion of sage juice (though sometimes other herbs such as nettles and parsley have been used) when the curds have been milled and are at the stage when they are about to be moulded into the characteristic wheel shape, traditionally about a foot in diameter.

Sage was highly esteemed in the 17th century for its digestive and other medicinal properties  it is today said to be good for middle aged women - but it also lent a different flavour to the cheese  product differentiation is not new.
At one time Sage Derby was made for the festivals from harvest time to New Years, typically aged for four to six months, longer perhaps than would be considered usual for it today, but in our day it is available all year. Over the years special version were produced, some with green shapes dropped into white Derby cheese for decoration. The cheese still has a celebratory air to it, however, its subtle green flavour going well with robust red wines.