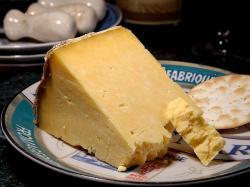 Cheshire claims to be one of the oldest of Britains cheeses, with some experts claiming it either predates the Roman occupation or was developed during that epoch. It is certainly mentioned in the Domesday Book .

Of course the nature of the cheese has changed over the centuries. When transport was slow and roads were rutted and rough the cheese was pressed to a firmer texture than is used today, to enable the product to survive transport to distant markets. In the 18th century Cheshire cheese enjoyed a massive boost with the navy only buying Cheshire and for a time Gloucester cheeses for its ships.

Somewhat strangely, Cheshire cheese is traditionally not confined to that county, but is also made in Shropshire , Staffordshire , Flintshire and Denbighshire, all counties bordering it. It was the Welsh who long ago started dyeing the product red, a gimmick so successful that the home county adopted it for much of its production.

In Cheshire itself Malpas is a noted centre for production, and fortuitously the county has probably the best annual cheese show in Britain, held in Nantwich.

True Cheshire is a crumbly, moist cheese, relatively young  it is matured for less than three months, sometimes only six weeks  and with a distinct saltiness. Cheshire has its salt mines, and some attribute the salinity of the cheese to the areas geology, with the milk from this traditional dairy countryside taking in the salt somehow through the verdant grasses of the countys extensive pasture. Less romantically, the cheese is quite heavily salted in production, though the ready availability of salt in the county perhaps explains the method. The protection of this salinity possibly explains the 18th century navy specifying it, although a hefty bribe may have also been involved. The moist refreshing flavour cannot have hurt either.

Blue Cheshire, made with a slightly higher acidity than the white or red, is called locally green fade. In earlier times it was thrown out, or used to dress wounds! These days it is made specially, the cheese being pressed less to help mould growth. The flavour of the blue variant is sharper, the cheese having a higher acidity, but it is undoubtedly more complex than its white cousin, with a cobnut edge.