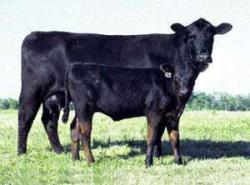 The cattle  known at first as doddies - which were to become the Aberdeen Angus were first seen as a separate breed in the 18th century, though the society formed to promote them was only formed in the following century  in fact as late as 1879, 17 years after the herd book for the cattle was originated. Three names figure prominently in the early history of the breed: Hugh Watson, who early in the 19th century sourced and selected stock to breed a herd with defined characteristics; William McCombie, who carried on that task, largely with cattle from the Watson farm; and Sir George Macpherson-Grant, whose work refining the breed took it one stage further.
There are in fact two distinct lines to the breed: Black Angus; and Red Angus. Physically the most obvious characteristic of the Angus is the lack of horns, something used in cross-breeding with other cattle. They are said to be well-behaved and not overly aggressive, and because the calves are relatively small they calf easily.
But of course the thing of most interest to the consumer is the quality of the meat: above all it is a well-marbled meat, the fat within the muscle keeping the cooking flesh moist, and giving flavour. This marbling tends to be fine and well spread, rather than course as with some other breeds. Various fast-food chains have used the name to sell premium burgers, and indeed taste tests have supposedly shown that burgers made with Angus meat can be differentiated from the usual product, though that may not be the meats greatest ever accolade.
Craft butchers fighting to compete with the supermarkets are using the power of names like Aberdeen Angus and the specific distinct qualities of the meat from such breeds, a world apart from the plastic-wrapped polystyrene trays of anonymous bright pink meat too often on offer away from the independent sector. They merit our support.