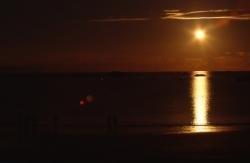 Herm Island
Did you know that author and Renaissance Chap Sir Compton Mackenzie leased Herm and Jethou between 1920 and 1930? He lived for the first three years of his lease on the former, then the next seven on the latter. One of the co-founders of the Scottish Nationalist Party, he was born in Hartlepool , educated at St Pauls and Oxford , and before moving to the Channel Islands spent 13 years on Capri. He had the grace to move to Barra and die in Edinburgh though.
St Peter Port
Did you know that Victor Hugo wrote his novel Les Misérables while living at Hauteville House in St Peter Port? He escaped to Jersey via Brussels in 1852, and in 1855 moved to Guernsey, where he stayed with his family until 1870. Hugo was offered an amnesty by Napoleon III in 1859, but refused to return to France until the Emperor had fallen from power  his exile just a year shorter than Valjeans imprisonment.